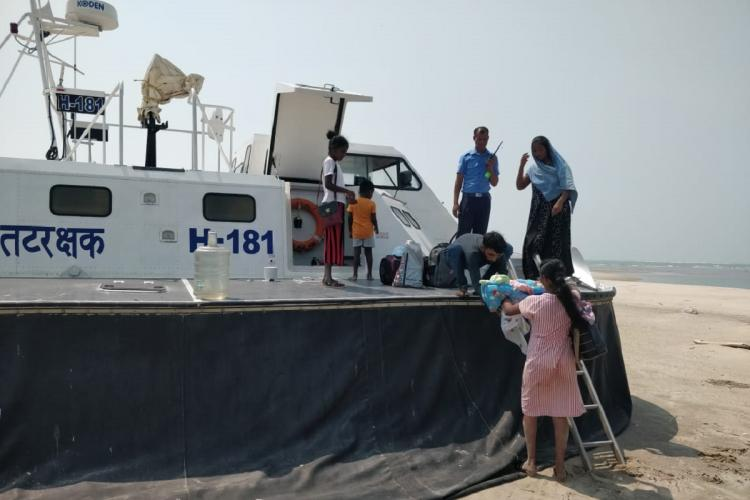 16 refugees, fleeing food shortage and economic misery in Sri Lanka which is facing a forex crisis, have landed in Tamil Nadu but are facing an uncertain future as India has no law to safeguard them.

With Sri Lanka facing an economic meltdown and shortage of essentials including food and fuel, several young families have fled the island country to the shores of Tamil Nadu seeking refuge. This week, so far, 16 Sri Lankan Tamils have reached Tamil Nadu. They are from Jaffna and Kokkupadaiyan, in northern Sri Lanka, and undertook a difficult journey to reach India. The refugees include three men, six women, a four-month-old infant and seven children. They were picked up from islets near Rameswaram and Dhanushkodi where they landed on Tuesday by officers of the Indian Coast Guard. According to the refugees, the economic crisis in Sri Lanka forced them to flee the country, as they could not afford to feed their families.

However, in the absence of a refugee law in India, some of them have been booked under the Passport Act and the Foreigners Act. The three Sri Lankan men who arrived in Tamil Nadu this week have been lodged in the Puzhal Prison after being presented before a magistrate, while the women and children are being housed in the Mandapam Refugee camp for Sri Lankan refugees, 700 km from Chennai.

TNM spoke to multiple human rights activists and migration law experts to understand the fate of the refugees who have already arrived, or would be landing up in India in the coming weeks, in the event of the current crisis in Sri Lanka worsening.

“India does not have a refugee law in place as it is not a signatory to the 1951 UN Convention Relating to the Status of Refugees and the related protocol,” said N Sathiya Moorthy, an expert on the Sri Lankan refugee crisis. However, from 1983 onwards and until 2021, India has provided refuge to over three lakh Sri Lankan Tamil nationals, who fled ethnic persecution in their war-torn homeland and landed in India. They were put up in the Mandapam camp and allowed to work as daily wagers. They were also allowed to access education for themselves and their families. “This happened because the Indian government agreed to shelter Sri Lankan Tamil refugees on humanitarian grounds,” Sathiya Moorthy explained.

In the backdrop of the current crisis in Sri Lanka, the Indian government, over the next few months, would have to evaluate the extent of refugee influx into Tamil Nadu before it can decide on the next course of action, experts said. “Immigration comes under the Union list and unfortunately the state government will have no say when it comes to formulating policies dealing with the new wave of economic migrants from Sri Lanka. It will be left to the Union government,” Sathiya Moorthy said.

“Many factors including security concerns, bilateral relations between India and Sri Lanka, ethnic history with regard to Sri Lankan Tamil migration to India, and the proof of identity of refugees etc will be considered by the Union government before refugee status can be granted to the new migrants,” he said. If the number of migrants crossing over to Tamil Nadu is quite large, the state government may not be able to handle it alone, Sathiya Moorthy added.

Poongkothai Chandrahasan, founder of Serendip Be The Change Foundation, which runs programmes to empower vulnerable Tamils from the northern parts of Sri Lanka, believes that economic migrants should not be treated differently from people fleeing a country due to political reasons or ethnic strife. “All the earlier migrant influxes from Sri Lanka happened due to ethnic conflict and civil war in Sri Lanka. They were war refugees,” she said. The refugees who reached Tamil Nadu shores recently are however being termed as economic migrants, a term suited for those who seek economic advancement on foreign soil. “But are these Tamil nationals seeking economic advancement? They are not. They are merely fleeing hunger and impoverishment in Sri Lanka. They are not able to feed their families and even buy essential goods such as milk,” she said, adding that the inflation has triggered a humanitarian crisis in Sri Lanka.

“The inflation in Sri Lanka right now is shooting up. Within a week, the exchange rate of Sri Lankan rupee vis a vis the US dollar has gone up from Rs 200 to Rs 276. The Sri Lankan government is now depreciating its currency in order to seek a grant from the International Monetary Fund. There’s an import crisis within the country, which primarily runs on imported goods. The situation is so bad that the government has cancelled exams as they cannot afford to import paper. Three people have died standing in queues to buy fuel, the prices of which have skyrocketed,” Poongkothai said.

Henri Tiphagne, executive director of People’s Watch, a human rights organisation, said the action by the Tamil Nadu government of slapping cases against the refugees and putting them in prison amounts to human rights violations.

“I have been closely working with Sri Lankan Tamil Refugees, who fled the ethnic conflict  in the 1990s. They were put up in the Mandapam camps, and fed, their children were sent to schools and they were allowed to work. The state government even set up a State Bank of India counter for the migrants to exchange their currency to the Indian rupee,” Henri said, alleging that the manner in which the Tamil Nadu government is treating these refugees now is drastically different.

He said some of these refugees had lived in India for decades during the period of ethnic conflict in Sri Lanka and had gone back to their home country after the war ended.

Poongkothai said the Tamil Nadu government should initiate steps to house all refugees in the Mandapam camp, a secure enclosure near Dhanushkodi, as a transit measure and wait to see if more people would seek refuge. “Once the economic crisis ends, they can be sent back to Sri Lanka,” Poongkothai said.