It is 12 pm. The sun is directly over Afsana’s head as she stands in front of her college gates. It is the third hour of classes and through the window, she can see the faces of her classmates. She can even work out that they are revising their final psychology lesson.  But Afsana Piyaji, 20, and four of her closest friends, are only able to look on from the outside. “We were told by our principal to go out and stop disturbing the others in the college,” Afsana says. She has missed her classes for over a month since the college disallowed them from wearing the hijab in the classroom.

Last week, the Karnataka High Court upheld a ban on the hijab in the classroom, a decision that Afsana is still struggling to process. “I came to the college thinking that there would be a solution…any solution,” Afsana says. “We had just paid our semester exam fees of Rs 730. I thought the principal will help us finish this academic year.”

Three years ago, Afsana decided to join a degree course in psychology, journalism and rural development at the G Shankar Women’s First Grade College, a government-aided college in Udupi, since her parents could not afford to enroll her in a similar course in a private college in Manipal, 5 km away. She should now be preparing for her final semester examinations and planning her next career move. “I want to study for another degree – Masters in Social Work – from a government college in Kaup after this,” Afsana says. “But now I really don’t know if it will happen. I want to wear the hijab as it is part of my faith but if I do that, I won’t be able to write my final exams.”

Afsana is among 232 degree students in Udupi who are contemplating their academic future after the High Court verdict, according to information available with the education department. There are atleast 183 more pre-university students who are also missing their exams, according to the Udupi district Muslim Okkoota, a coalition of Muslim organisations in Udupi. This is 12.5% of the total Muslim girls (1446) in pre-university colleges in Udupi. 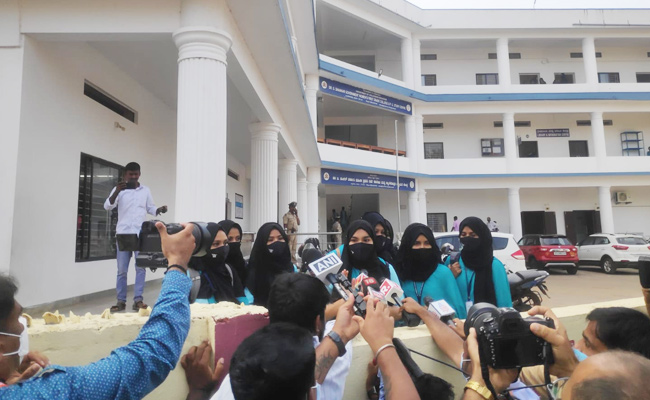 A few students, faced with the prospect of leaving their college, are planning to take off their hijab and write their examinations after the court upheld the ban on the hijab. “I am in my third year and I might lose three years of my course if I don’t do this,” says a student from G Shankar Women’s First Grade College who did not wish to be named. Sitting next to her, a close friend and classmate, Afraa Ajmal Assadi, 20, is planning to leave her college. “We used to sit on the same bench in class and spend our free time together but on this (hijab), I cannot compromise and I will be looking for a substitute college or an online course,” Afraa says.

The enforcement of a hijab ban has pushed parents and students in Udupi to think about transferring out of their colleges. In some cases, families are planning to migrate to a different town for the sake of education. “We are thinking about moving to Mangaluru to help our daughter continue her studies in a college where the hijab is allowed,” says Mohammed Ali, a parent of a BSc student studying in Mahatma Gandhi Memorial (MGM) College in Udupi. Until this week, he and his daughter were hoping that the High Court would allow the hijab to be worn by students in colleges where it was previously allowed. “I was scared to watch the TV on the day the judgment was announced (by the Karnataka High Court). But I was following our WhatsApp group and we were hoping that the hijab would be allowed in colleges like ours which previously had no issue with it,” says the daughter. 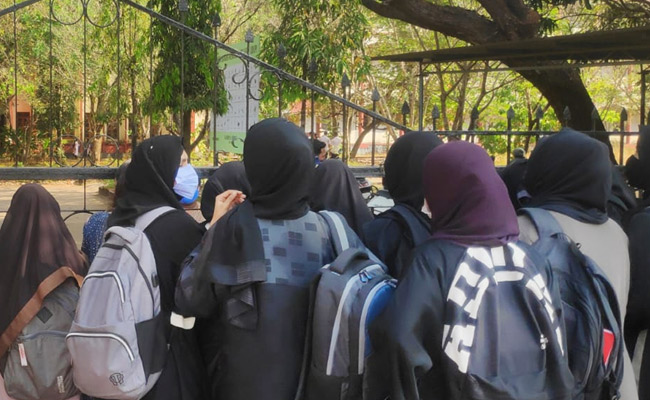 There are 58 students from the college, who have approached their college principal multiple times requesting permission to write their examinations. One of the requests put forward by the students was to be allowed to write their exams in a separate room. “We even agreed to take off the hijab if we were seated in a separate room and had a female teacher as the invigilator. This request was also denied,” she says.  “I cannot imagine going to class without the hijab,” she adds, pointing to two verses in her copy of the English translation of the Quran. “The hijab is mentioned in the Quran and I consider it a necessary part of our faith.

But transferring to private institutions where the hijab is allowed is not an option for students like Afsana, for whom the enforcement of a hijab ban could spell the end of her education. With her parents separated, Afsana’s modest college fees of Rs 3,000 in the government-aided college she studies in, was paid by her uncle. She speaks with unwavering clarity about what is at stake for her. “I won’t be able to afford the fees at private colleges, if I leave my current course,” says Afsana. 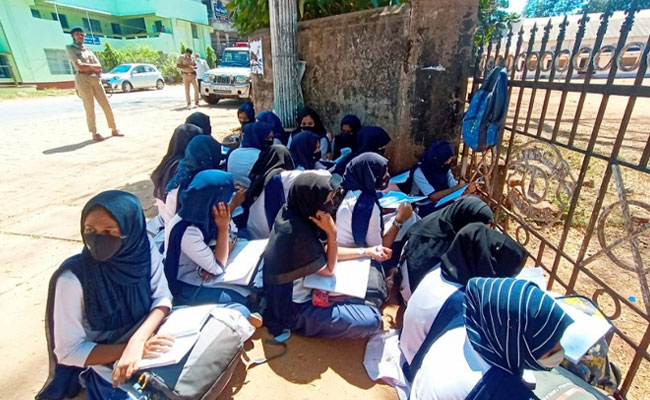 Udupi, a district with a population of 11.7 lakh, only has 8.22% Muslim population, according to the 2011 census data. In the neighboring district of Dakshina Kannada, whose population is nearly twice that of Udupi, Muslims make up 24% of the population. Muslim groups say the same issues are being faced by them even in districts where the population of Muslims is higher than in Udupi.

The Muslim Okkoota in Udupi, which is documenting the number of students impacted by enforcing a ban on the hijab, say that they have received requests for online classes from Muslim students in Uttara Kannada, Dakshina Kannada, Kodagu, Chikkamagaluru and Shivamogga. “The epicenter is here in Udupi because this is where the issue began. But we have received requests for online classes from many other districts, including from all the neighboring districts, as well,” says Hasan Maved, a member of the Okkoota.

In fact in one college in Dakshina Kannada – the Government Pre-University College in Uppinangady –  231 Muslim students sat out their preparatory examination on Friday, March 18, after they were told they will be restricted from wearing the hijab. This included Muslim boys who extended solidarity to Muslim girls.

The Okkoota termed it a crisis situation for hundreds of families, who are worried about their daughters’ future. “Since the verdict was announced, we have had 35 more students sign up for online lessons that we have arranged for pre-university and degree students. Every day we field around 5-10 calls from students and parents who are distressed about their future,” says Hasan. “This is a crisis for these families. They don’t know how their daughters will finish the current academic year,” adds Hasan.

Read: The anti-feminist hijab verdict will push Muslim girls into an education emergency