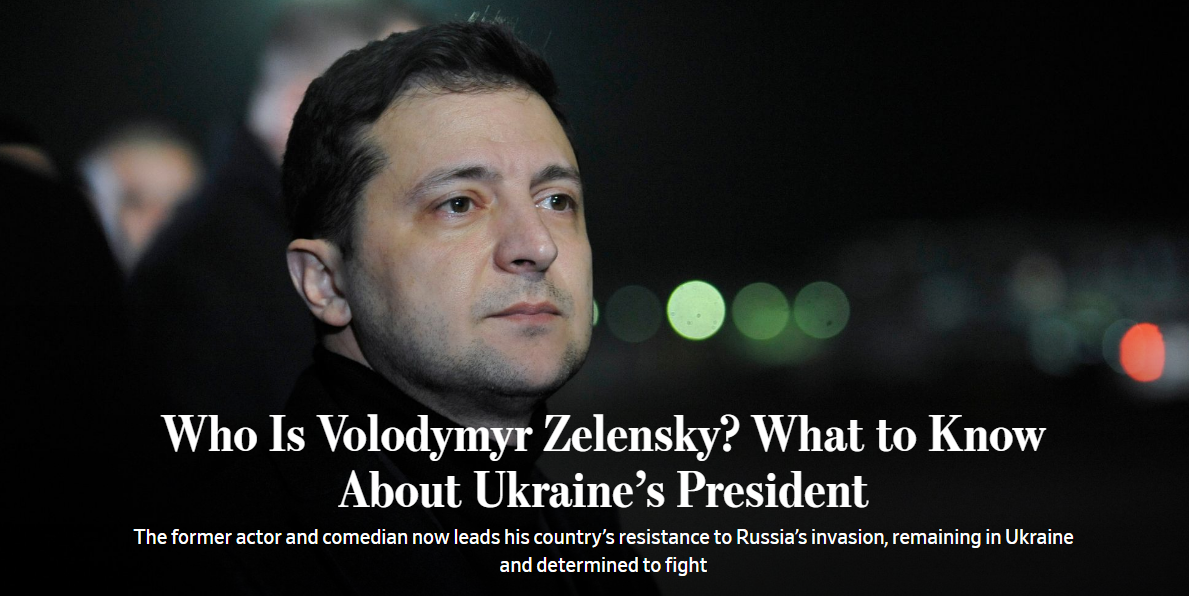 Volodymyr Zelensky in 2019, the year he was elected president of Ukraine. SERGEI CHUZAVKOV/AGENCE FRANCE-PRESSE/GETTY IMAGES

President Volodymyr Zelensky has become the face of Ukraine’s resistance against Russian President Vladimir Putin’s invading forces, with impassioned speeches such as Wednesday’s virtual address to U.S. Congress. But Mr. Zelensky came into power with little traditional political experience. Before he was elected, he was best known for playing a television role as an ordinary schoolteacher accidentally catapulted into power. The show, “Servant of the People,” ran for four years, making him a household name.

Since the Russian strikes began on Feb. 24, Mr. Zelensky has captured the world’s imagination, often dressing in ballistic vests as he urges people to press the fight during videos he posts to Telegram, Facebook and Instagram from the center of Kyiv. At other times, the 44-year-old has harangued Western leaders to step up efforts to defeat Mr. Putin. Frustrated with the West’s unwillingness to intervene militarily, Mr. Zelensky has repeatedly pressed the North Atlantic Treaty Organization to enforce a “no fly” zone over Ukraine, an idea NATO has rejected, saying it would put the alliance into a war with Russia.

Mr. Zelensky says he knows he is at the head of the Kremlin’s kill-or-capture list, but insists that neither he nor his family will leave as he tries to keep his battered country together.

How long has Volodymyr Zelensky been president of Ukraine?

Mr. Zelensky was elected president in 2019, defeating the incumbent Petro Poroshenko by casting himself as an antiestablishment outsider bent on cleaning up corruption and securing better relations with Moscow. His pitch was largely based on the role he played on his TV show, where he portrayed an ordinary man thrown into the presidency to clean up the country. Even his political party was named after the show.

Where is Zelensky now?

Mr. Zelensky has spoken from his Kyiv office in recent days, but his exact location is a security matter. In a recent ABC interview, he said he had been offered safe passage out of the country if the situation further deteriorated but said he would remain. Mr. Zelensky was shown visiting wounded soldiers at a hospital in an undisclosed location in a video released Sunday by the presidential press service.

What did Zelensky say in his speech to Congress?

Mr. Zelensky spoke via a translator for most of the speech but closed in English with a personal plea to Congress and the president. He focused his requests on bolstering Ukraine’s air-defense systems.

The video address was one in a series by the Ukrainian president to Western governments this week.

“You all need to do more to stop Russia and protect Ukraine and protect Europe. They are destroying everything,” he told Canadian lawmakers on Tuesday. He pressed German lawmakers on Thursday to set up an airlift for humanitarian aid to Ukraine, among other initiatives.

How has Zelensky handled the invasion?

Early on, Mr. Zelensky directed much of his energy toward projecting a sense of calm as Russian forces steadily built along Ukraine’s borders to eventually total as many as 190,000 troops. He said U.S. warnings of an imminent invasion were overblown and were damaging Ukraine’s economy. Mr. Zelensky pointed to an even larger Russian buildup last spring that was eventually withdrawn.

But after the first Russian strikes began to hit Kyiv and other Ukrainian cities on Feb. 24, he pivoted hard toward shoring up Ukraine’s defense, securing as much Western assistance as he could obtain. With Russian propaganda claiming he had already fled the country, he made a hand-shot video of himself out on the street in front of the presidential palace in Kyiv to urge on Ukrainians in their defense of the country. It drew millions of views on Telegram and Facebook. Gone were the suits and ties, in came military sweatshirts.

Mr. Zelensky spoke frequently with Western leaders, urging them to increase sanctions on Moscow in the hope of breaking the Russian advance. As he pleaded with European leaders in a video call to take tougher action, he warned them that this might be the last time they saw him alive, according to several diplomats.

“The silence in the room was impressive,” a senior European Union official said. Shortly after, the 27-nation bloc moved to significantly expand the range of measures as the West hardened its response to Moscow’s aggression.

How has Zelensky’s stance against Russia evolved?

Mr. Zelensky initially sought a rapprochement with Russia when he was elected president in 2019. Ukraine had been at loggerheads with the Kremlin since 2014, when Russian forces annexed the Black Sea port of Crimea and stirred up a rebellion that led to two pro-Russian regions breaking away from Kyiv’s control. Mr. Zelensky pledged to improve relations with Mr. Putin, and had some early successes. He secured a prisoner exchange with Russia and moved toward a deal on how to build on a 2015 cease-fire agreement.

Street protests against his plans forced him to change tack. Western diplomats warned him that Mr. Putin was trying to get him to sign an agreement that would provide him with long-term influence over Ukraine’s future via Russia’s proxies in the breakaway regions, with the goal of barring the country from joining the EU or NATO, the North Atlantic Treaty Organization.

Mr. Zelensky instead turned toward persuading NATO to engage in a closer relationship with Ukraine while launching a popular campaign to win back control of Crimea. A person close to him said Russia had begun to see him as being too similar to Mr. Poroshenko, whom he succeeded as president, and someone Moscow saw as intent on pushing Ukraine closer to the West.

Political analysts said the prospect of Ukraine aligning itself more closely with the West had enraged Mr. Putin, who has long been trying to restore Russia’s sphere of influence, which had been curtailed severely since the end of the Cold War more than 30 years earlier.

On the fifth day of the invasion, Mr. Zelensky said the Ukrainian people were now fighting to become equal members of the EU—with many paying the ultimate price. “We are giving our lives for the right to be equal,” he said, unshaven and wearing a green army T-shirt. “Prove that you are with us and will not let us go.”

How did Zelensky rise from television comedian to president?

Mr. Zelensky studied law at university but after graduating entered the entertainment business, founding a television-production company. He became famous for his skits, including one where he and some accomplices dropped their trousers and pretended to play a piano with something other than their hands. Later, he won the Ukrainian version of “Dancing with the Stars” in 2006 and voiced the role of Paddington in the eponymous movie about a young bear who visits London.

It was his TV show “Servant of the People” that captured the mood of the country when the program first aired in 2015, however. Mr. Zelensky played a humble schoolteacher who candidly ranted on a video about the everyday corruption many Ukrainians need to contend with. The clip went viral, launching a political career that ultimately propelled his character into the presidential palace.

The success of the show convinced Mr. Zelensky that he should try his hand at politics for real. His campaign echoed many of the themes he explored in the TV show and his political party carried the same name, “Servant of the People.” He won the second-round runoff against the incumbent, Mr. Poroshenko, with about 73% of the vote.

What is Zelensky’s family background?

Born on Jan. 25, 1978, Mr. Zelensky grew up in a gritty, Russian-speaking region in southeast Ukraine. His background was Jewish; several family members died in the Holocaust while his grandfather served in World War II as an officer in the Soviet army. His father, a mathematician, and his mother, an engineer, chose to stay in Ukraine while many other Jews departed for the U.S. or Israel when the former Soviet Union permitted them to emigrate. Childhood friends recall how he stood out for his earring and his good grades in school. He later obtained a law degree at Kyiv National Economic University.

Mr. Zelensky himself has made little of his Jewish identity, saying in 2020 that he came from an ordinary Soviet Jewish family and that most such families weren’t religious. This appears to ignore how Jews in the former Soviet Union, including Ukraine, largely had to suppress their religious identity and were viewed as outsiders. Some commentators have suggested this has informed Mr. Zelensky’s own self-image as an outsider, reflected in both his TV work and his presidential campaign in 2019.

Ukrainians appear more favorably disposed toward Jews than do the people of other countries that were in the Soviet bloc. A Pew Research Center poll in 2019 found that 5% of Ukrainians were unwilling to accept Jewish people as fellow citizens, compared with 18% in Poland, 19% of Czechs and 22% in Romania. And Ukraine’s prime minister when Mr. Zelensky became president, Volodymyr Groysman, is also Jewish.

What happened between Zelensky and Donald Trump?

Shortly after becoming Ukraine’s president, Mr. Zelensky was thrust into the center of U.S. politics after President Donald Trump was accused of pressuring him in a telephone call to investigate his chief rival at the time, Joe Biden. An impeachment resolution in the House of Representatives alleged that Mr. Trump had made the provision of $391 million in U.S. security aid contingent on Mr. Zelensky publicly announcing a probe. After Mr. Trump’s actions came to light, the resolution charges, he released the aid, which was meant to strengthen Ukrainian forces in the eastern part of the country.

Mr. Trump rejected allegations of wrongdoing and, while he was impeached in the House, he was acquitted by the Senate.

Mr. Biden went on to be elected president.

This explanatory article may be periodically updated.

Write to James Hookway at James.Hookway@wsj.com