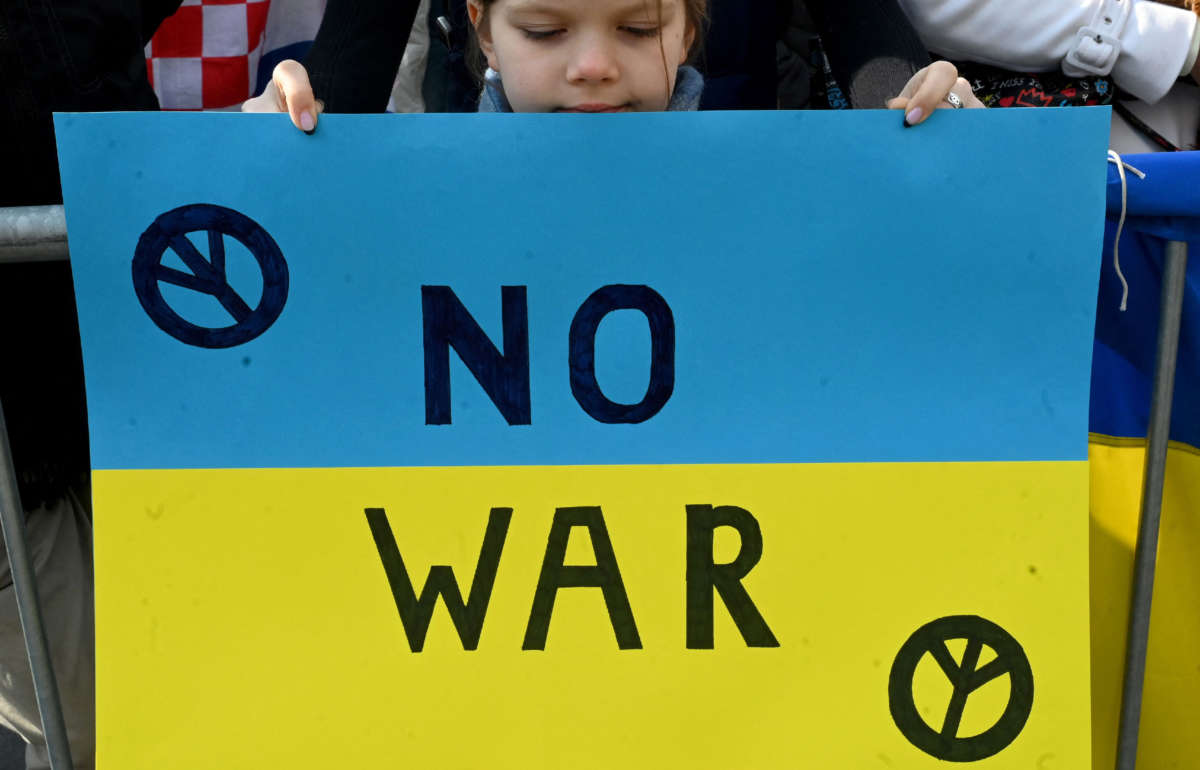 A girl with an anti-war message takes part in a protest in support for Ukraine following Russia’s invasion of the country, in Zagreb’s main city square on March 5, 2022.DENIS LOVROVIC / AFP VIA GETTY IMAGES

Negotiators said they’ve made progress on a potential peace deal to end the war in Ukraine.

The deal would require a number of concessions from both Ukraine and Russia — chief among them, Ukraine would have to agree to drop any intention of joining the NATO military alliance, and would also have to agree to not host any foreign military bases or foreign-based weapons within its borders.

In exchange, Russia will withdraw from Ukraine and accept new military agreements between Ukraine and the U.S. and European nations to ensure Kyiv is protected against the threat of future invasions.

There are still some major bumps in the road before a peace deal is brokered. Russian negotiators had also wanted Ukraine to declare itself a “neutral” nation, a proposition that Ukrainian leaders have rejected. But with guarantees of western protection pacts, the idea is now being “seriously discussed,” Russian Foreign Minister Sergey Lavrov said.

Earlier this week, Ukraine President Volodymyr Zelensky also described the talks as progressing and becoming “more realistic” for reaching a deal. Wednesday also marks the third straight day of negotiations — the first time they’ve lasted more than one day since the conflict began.

But other sticking points remain unresolved — the status of Crimea, a peninsula formerly under the control of Ukraine that was annexed by Russia in 2014. Continued requests from Zelensky for military assistance and a “no-fly zone,” as well as weapons pledges from other nations, could also disrupt negotiations.

On Wednesday, President Joe Biden announced $800 million in military aid to Ukraine — including hundreds of anti-aircraft systems, thousands of anti-armor systems, more than 7,000 weapons (such as guns and grenade launchers), as well as military drones.

Many pundits and hawks are also calling on Washington to help create a “no-fly zone” over Ukraine, an action that antiwar groups and experts say would be an extremely dangerous escalation. CODEPINK, a women-led grassroots group dedicated to expanding human rights and ending U.S. wars and militarism, protested against an increase in U.S. militarized involvement at steps of Capitol building on Wednesday — including urging Biden to reject calls for a “no-fly zone,” which the group said could lead to World War III.

“A No-Fly Zone would only exacerbate this conflict ten-fold, putting all of humanity at risk of annihilation,” the organization said.

While many are critical of militarization-based solutions, others are calling on the U.S. to participate in peace negotiations. In a recent Truthout interview, Noam Chomsky, Institute Professor Emeritus at MIT and currently Laureate Professor at the University of Arizona, explained that Washington needed to take part in those talks in order for them to succeed.

“Negotiations will get nowhere if the U.S. persists in its adamant refusal to join,” Chomsky said.

Chris Walker is a news writer at Truthout, and is based out of Madison, Wisconsin. Focusing on both national and local topics since the early 2000s, he has produced thousands of articles analyzing the issues of the day and their impact on the American people.