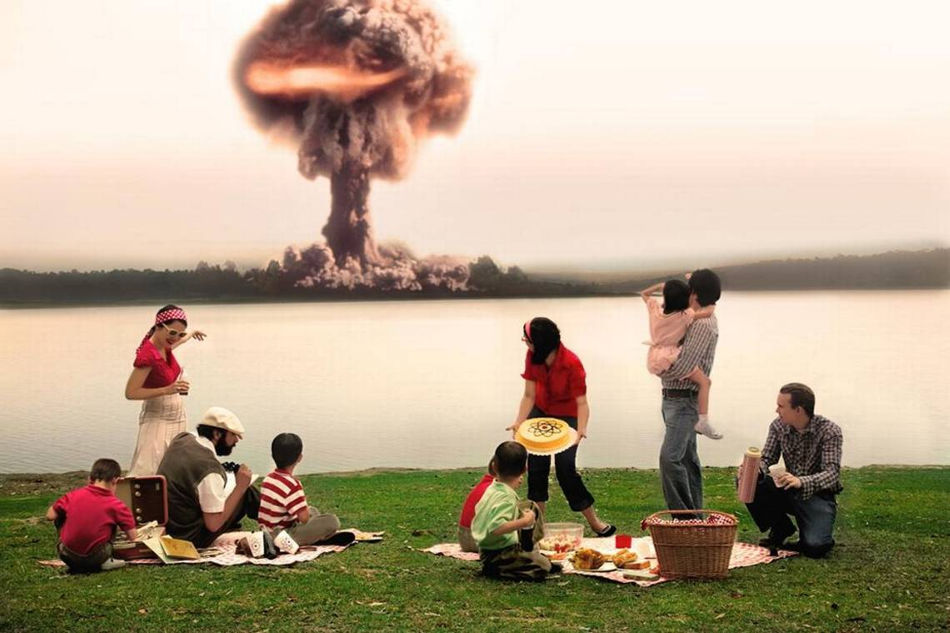 Greetings from the desk of the Tricontinental: Institute for Social Research.

On 27 February, Russian President Vladimir Putin met the Chief of the General Staff of the Russian Armed Forces Valery Gerasimov and the Russian Defence Minister Sergei Shoigu. ‘The top officials of the leading NATO [North Atlantic Treaty Organisation] countries have made aggressive statements against our country’, Putin said. Therefore, he told his top officials ‘to transfer the deterrence forces of the Russian army to a special mode of combat duty’. The last phrase, reasonably cloaked in bureaucratic language, means that Russia’s nuclear arsenal will move to high alert. Meanwhile, Russian forces appeared to have seized the Zaporizhzhia nuclear power plant in Ukraine, the largest nuclear power plant in Europe. Early reports that the power plant was on fire were false, although it was sufficiently chilling to hear that there had been fighting at the site.

More than 90% of the world’s 12,700 nuclear weapons are owned by the United States and Russia; the rest are found in seven other countries. About 2,000 of these warheads – held by the US, Russia, Britain, and France – are on perpetual high alert, which means that they are ready to be used at a moment’s notice. The United States has stationed nuclear weapons not only on its own territory but across the world, including in Europe; roughly 100 of its B61 nuclear gravity bombs are based in Belgium, Germany, Italy, Netherlands, and Turkey – all NATO member states. In 2018-19, the United States unilaterally withdrew from the 1987 Intermediate-Range Nuclear Forces (INF) Treaty, an arms control agreement with Russia, which promptly followed suit. The abandonment of the treaty means that each country can now deploy ground-launched missiles with a range of up to 5,500 kilometres, seriously weakening the security architecture in and around Europe. It is undeniable that the INF withdrawal is part of the reason why the Russians believe that the United States seeks proximity to its borders in order to deploy such missiles and reduce the strike time to Russian cities. On top of this, the United States is building a new $100 billion missile system called the GBSD (ground-based strategic deterrent) that can travel nearly 10,000 kilometres; this missile can carry nuclear weapons and strike any place on the planet in minutes.

These dangerous developments – the withdrawal from the INF, the development of the GBSD, Russia’s invasion of Ukraine – came after the world voted ‘yes’ on the Treaty on the Prohibition of Nuclear Weapons (2017) which went into force on 22 January 2021. An overwhelming number of United Nations member states, 122, voted in favour of this treaty; only one member (the Netherlands) voted against it. However, 69 countries abstained, including all nine of the nuclear weapons states and all NATO members (except the Netherlands). The Russian military action in Ukraine is a reminder, at the very least, of why a global nuclear weapons ban is necessary, and why every single country must commit to disarming and disposing of its nuclear weapons arsenal.

There is a practical method to take the global desire for the abolition of nuclear weapons forward: the expansion of the Nuclear-Weapons-Free Zones (NWFZ).

Since the early 1960s, Mexico’s representative to the United Nations, Alfonso García Robles, led the fight to develop a NWFZ in the Americas. If these regional zones are created and expanded, García Robles said at the UN in 1974, eventually the area ‘from which nuclear weapons are prohibited [will reach] a point where the territories of Powers which possess those terrible weapons of mass destruction will become something like contaminated islets subject to quarantine’. García Robles spoke with the prestige afforded to Mexico for its leadership in passing the Treaty of Tlatelolco in 1967. This treaty created the first NWFZ, which included 33 of the 35 countries of the American hemisphere; only Canada and the United States remained outside the zone.

Four other NWFZs have been created since the Treaty of Tlatelolco: in the South Pacific (Treaty of Rarotonga, 1985), in Southeast Asia (Treaty of Bangkok, 1995), on the African continent (Treaty of Pelindaba, 1996), and in Central Asia (Treaty of Semipalatinsk, 2006). Together, these five NWFZs include 113 countries, comprising 60% of the member states of the United Nations and every country on the African continent. The main legal agreements related to nuclear weapons, such as the Treaty on the Non-Proliferation of Nuclear Weapons (NPT, 1968), allow for the establishment of these Nuclear-Weapons-Free Zones; for example, article VII of the NPT states, ‘Nothing in this Treaty affects the right of any group of States to conclude regional treaties in order to assure the total absence of nuclear weapons in their respective territories’. The UN General Assembly has regularly called for the establishment of additional NWFZs.

None of the nuclear weapons states have joined these treaties. This is not from lack of interest. In 1966, Soviet premier Alexei Kosygin told the UN’s Disarmament Committee that his government was willing to include a clause into the NPT that would prohibit ‘the use of nuclear weapons against non-nuclear States parties to the treaty which have no nuclear weapons in their territory’. The next year, the Soviet Ambassador to the Disarmament Committee Alexei Roshchin said that his government hoped that the NPT should be considered as a ‘first step towards the cessation of the nuclear arms race, towards the elimination of nuclear weapons’.

These sentiments from Kosygin and Roshchin followed the plan that was proposed to the United Nations by Polish Foreign Minister Adam Rapacki on 2 October 1957 for the creation of a denuclearised central Europe. The Rapacki Plan suggested that a NWFZ be established in Poland and the two Germanys, with the hope that it be extended into Czechoslovakia. The plan was supported by the Soviet Union, along with all the countries of the Warsaw Pact (Albania, Poland, Czechoslovakia, Hungary, Bulgaria, Romania, and the German Democratic Republic).

Objection to the Rapacki Plan came from NATO and in particular from the United States. At the Paris meeting of the NATO council in December 1957, the military alliance decided to continue their nuclear weapons build-up, arguing that the Soviet Union would wield an advantage over European countries relying on ‘arms of the preatomic age’. Two weeks later, the Polish Foreign Ministry discussed NATO’s decision and formulated a reasonable response toward the creation of a second draft of the Rapacki Plan. The four new elements of the plan included:

NATO would not take any of these proposals seriously. The Rapacki Plan died a quiet death and has been largely forgotten. Today, there is no discussion about a Nuclear-Weapons-Free Zone in any part of Europe even though it is ground zero for the nuclear trigger.

Suggestions for Nuclear-Weapons-Free Zones for other parts of the world abound. Iran has been one of the proponents for a NWFZ in the Middle East. This was first raised at the UN in 1974 and was proposed in the UN General Assembly by Egypt and Iran each year from 1980 to 2018 and is adopted each year without a vote. But that proposal has been dead in the water because Israel refuses to accept it. In September 1972, Pakistan’s representative to the UN Atomic Energy Conference Munir Ahmad Khan proposed a NWFZ in South Asia, but the idea was set aside when India tested nuclear weapons in May 1974. Here and there, countries raise the issue of an Arctic NWFZ or a Pacific Ocean NWFZ, but none of these have come to pass. The main adversaries to these proposals are the nuclear weapons states, with the United States in the lead.

The fighting in Ukraine which is taking place in and around nuclear power plants and the loose comments made by powerful men about nuclear weapons remind us of the great dangers we face.

When I was a child, Indian schools commemorated Hiroshima Day on 6 August with great solemnity. Our school was given a lecture about the brutality and then we went to our classes and either made a drawing or wrote a story about what we had learned. The point of the exercise was to imprint a great hatred for war in our young minds. It strikes me that we – as a human civilisation – have forgotten about Hiroshima and Nagasaki and the terrible weapons dropped upon their populations by the United States in 1945.

I have spent years reading the words of the hibakusha, the survivors of those attacks, and re-reading the journalism of Wilfred Burchett, John Hersey, and Charles Loeb and the writings of Kenzaburō Ōe, Kōbō Abe, Masuji Ibuse, Michihiko Hachiya, Sankichi Tōge, Shinoe Shōda, Tamiki Hara, Yōko Ōta, Yoshie Hotta, and others. These writers illuminate the terror of war and the amnesia inflicted on the world by those who want to continue to drag us into conflict after conflict.

In this reading, I encountered the exchange between Günther Anders, a German Marxist philosopher, and Claude Eatherly, one of the US pilots who flew as part of the squadron that bombed Hiroshima. Anders wrote to Eatherly in 1959, beginning a correspondence that resulted in a broken Eatherly writing for forgiveness to the people of Hiroshima. The response from thirty young hibakusha women to Eatherly moved me deeply, as I hope it will move you too:

We have learned to feel towards you a fellow-feeling,
thinking that you are also a victim of war
like us.

It is as if the hibakusha women were channelling the sentiments that first created International Working Women’s Day over a hundred years ago, a day which, in 1917, was the spur to the revolution in Tsarist Russia. Of war and its divisions, one of the day’s founders Clara Zetkin wrote, ‘The blood of the killed and the wounded must not be a stream to divide that which unites the present distress and the future hope’.