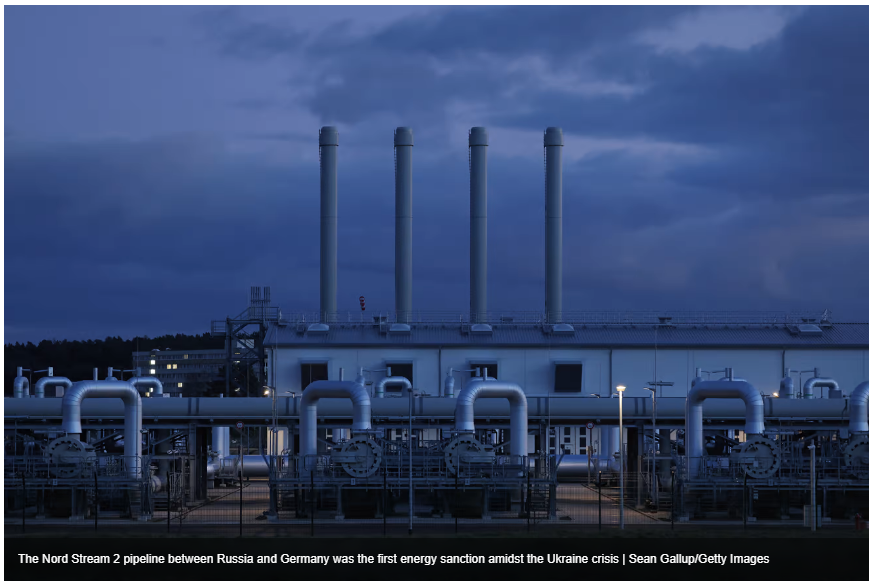 European countries are reluctant to stop buying oil and gas from Russia for fear of economic consequences at home.

Who’s paying for Russian President Vladimir Putin’s jet fighters and tanks? The same EU countries that say they want him to stop his assault on Ukraine, a country that is supposedly their ally.

It’s a crazy paradox that Polish Prime Minister Mateusz Morawiecki raised at an EU leaders’ summit on sanctions against Moscow that ran into Friday morning. The bloc was unable to agree measures against the SWIFT international payments system because so many countries use it for their all-important gas payments to Moscow.

“We are buying as European Union lots of Russian gas, lots of Russian oil. And President Putin is taking the money from us, from the Europeans. And he is turning this into aggression, invasion,” he said.

POLITICO has pulled together a graphical snapshot of how hooked on Russian supplies the EU is, despite years of promising to reduce its dependence on gas.

Russian gas made up 42 percent of Europe’s gas imports via pipeline alone. Shutting that off would create painful economic fallout for European countries that are already grappling with the specter of high inflation.

At €60.1 billion in 2020, energy makes up around two-thirds of Europe’s imports from Russia. While the reliance on Russian gas is often highlighted, this is dwarfed in value by imports of petroleum oils.

Only Gazprom is allowed to operate the pipelines used to export gas to Europe. It is the largest supplier of gas to the EU.

Natural gas supplies from Gazprom to European countries in 2020, in billion cubic meters.

The trade (both domestic and international) in energy commodities is also very significant for Russia’s economy and the state’s finances, making up nearly one-fifth of the national budget, according to provisional figures for 2021.

Trade with Europe is a big chunk of that. Mineral exports to Europe (including hydrocarbons) make up close to half of the total. It is hard to calculate what proportion of that figure goes directly into state coffers, but it is clear it amounts to a significant contribution.

“The current state of the global oil market, and the current very, very high price that we are seeing are definitely benefitting Russia a lot,” said Mario Bikarski, Russia analyst at The Economist Intelligence Unit. “This is all really beneficial for Russia’s foreign exchange reserves because Russia has these fiscal rules according to which all revenues above $43 per barrel of oil go into the national sovereign wealth fund.”

As a point of comparison, the value of European mineral imports from Russia is more than the amount the Kremlin spends on the military.

In a statement to MPs in the House of Commons on Thursday, U.K. Prime Minister Boris Johnson drew a direct link between energy purchases and Putin’s actions. “At the G7 meeting this afternoon, we agreed to work in unity to maximise the economic price that Putin will pay for his aggression,” he said, “And this must include ending Europe’s collective dependence on Russian oil and gas that has served to empower Putin for too long.”

Poland’s Prime Minister Mateusz Morawiecki put it even more bluntly after an EU summit Thursday night: “We are buying as European Union lots of Russian gas, lots of Russian oil. And President Putin is taking the money from us, from the Europeans. And he is turning this into aggression, invasion,” he said.

Other than shelving the Nordstream 2 pipeline between Russia and Germany — that was not yet operating — European leaders had been reluctant to hit Russian oil and gas interests directly in sanctions announced ahead of the Russian invasion. The sanctions package announced on Thursday evening also shied from significant blocks on Russia’s trade in oil and gas although it did include some limited energy provisions.

To severely curtail the flow of funds to the Kremlin and hence to the war effort in Ukraine, Western countries could reduce Russian gas purchases and place an embargo on sales of Russian oil. But that would push prices and hence inflation even higher, which is a price most EU countries are unwilling to pay.