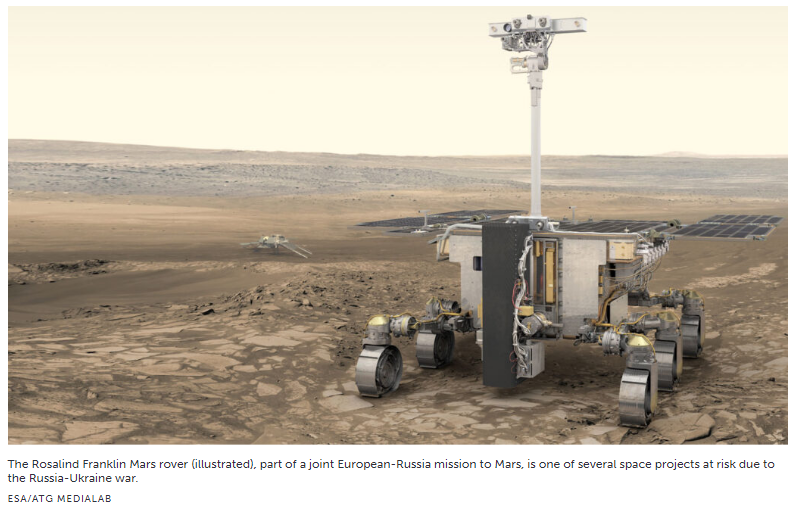 A Mars rover, an X-ray telescope and several low-Earth satellites are all on hold

Space exploration may seem like a faraway endeavor from Earth’s surface, but events on the ground ripple into space. The Russian war on Ukraine is no exception.

From a rocket launch system to a rover set to explore Mars, a wide range of space missions is facing postponements or cancelations due to escalating tensions on the ground in the wake of Russia’s full-scale invasion into Ukraine on February 24. The European Union, United States and others have imposed sanctions on Russia; Russia, as a result, is continually changing and canceling its space-related plans. The shifts are having an impact on everything from international collaborations to missions that rely on Russian rockets to get to space.

Here’s a closer look at some of those projects.

The ExoMars mission is a partnership between the European Space Agency and the Russian space agency Roscosmos. This is a two-part mission to Mars consisting of an orbiter and a rover. The orbiter has been at the Red Planet since late 2016, but the Rosalind Franklin rover was supposed to launch this September (SN: 10/18/16).

“The sanctions and the wider context make a launch in 2022 very unlikely,” the European Space Agency, or ESA, said in a February 28 statement in response to Russia’s invasion of Ukraine.

Due to Earth’s and Mars’ orbital geometry, the most direct trajectory for a spacecraft from our planet to Mars repeats every two years, and that launch window remains open for less than two weeks. The ExoMars rover, which will look for signs of past life, was originally to launch in 2020, but due to the pandemic and technical issues, it slipped to 2022 (SN: 3/12/20). Now it’s at risk of slipping again to 2024.

Spectrum-Roentgen-Gamma is a space-based X-ray observatory, run jointly by Germany and Russia, that has been mapping the large-scale structure of the universe for the last two and a half years (SN: 7/8/20). The probe’s main telescope, eROSITA, has discovered hundreds of celestial objects, including a bizarre stellar explosion known as a “cow” (SN: 1/21/22). On February 26, the Germans placed eROSITA into safe mode as an action to “freeze co-operation with Russia,” according to a statement from SRG leadership at the Max Planck Institute in Garching, Germany.

“This is a standard, reversible, operation mode of the telescope, in which we do not take data, but keep the vital subsystems on,” says Andrea Merloni, an astronomer at the Max Planck Institute for Extraterrestrial Physics, also in Garching, and eROSITA’s project scientist. He declined to comment on any other aspect of the mission or collaboration with Russia.

The Russian News Agency TASS reported March 1 that Roscosmos intends to estimate the financial loss of that safe-mode action and other European space-related sanctions, and the Russian space agency will then bill “the European side” of the projects.

ESA, meanwhile, is “assessing the consequences on each of our ongoing programmes conducted in cooperation with the Russian state space agency,” the agency said in its February 28 statement.

In response to international sanctions against Russia, the head of Roscosmos announced February 26 that the agency was suspending cooperation with the European spaceport in Kourou, French Guiana, and withdrawing its dozens of employees from the site. Several space missions were set to launch from this location via a Russian Soyuz rocket in the next year, including a pair of European navigation satellites in early April.

These satellites would have joined with the already-launched two dozen that make up the Galileo navigational system, the European answer to the United States’ GPS system. Two additional Galileo satellites are also in orbit, but they were placed incorrectly and instead focus on science and search and rescue (SN: 12/10/18).

The U.K. company OneWeb, which is building a space-based internet network with hundreds of low-Earth satellites, is also facing a launch postponement.

A Soyuz rocket was scheduled to send up a few dozen OneWeb satellites March 4, one of a series of launches aimed at completing the network in 2022. But in the early hours of March 2, the head of Roscosmos tweeted the space agency wouldn’t launch the satellites without a guarantee from the company that they wouldn’t be used for military purposes. He also demanded the U.K. government sell its share of the mission, which it has refused to do.

The Russian-Ukraine war has also affected U.S. space activities, but to a lesser extent than its impact on its European counterparts. NASA has relationships with several commercial partners, so the agency relies less on Roscosmos. But NASA is still feeling some effects.

For instance, in retaliation to U.S. sanctions, the head of Roscosmos tweeted on February 26 that NASA’s participation in the Russian-led Venera-D mission to Venus would be “inappropriate.” This mission will include an orbiter, lander and surface station, and it will focus on understanding Venus’s former and present habitability.

However, Venera-D won’t launch until late this decade, and NASA has been involved only in some planning groups. The U.S. space agency already has two of its own Venus missions in the works (SN: 6/02/21).

While many areas of cooperation in space with Russia are fraying, the International Space Station collaboration so far remains unchanged. “NASA continues working with all our international partners, including the State Space Corporation Roscosmos, for the ongoing safe operations of the International Space Station,” NASA public affairs officer Joshua Finch, at Kennedy Space Center in Cape Canaveral, said in an e-mailed statement.

However, during a March 1 NASA Advisory Council meeting, Wayne Hale, a former NASA associate administrator, recommended the U.S. space agency consider contingencies in case Russia no longer collaborates on the space station. At the same meeting the following day, former U.S. representative Jane Harman recommended that NASA think about what cooperation with Russia will look like going forward.

Other science collaborations at risk

Space research is not the only area of science experiencing uncertainty due to Russia’s war on Ukraine. Here are two other scientific collaborations showing signs of strain.

Nuclear fusion: In Southern France, an international group of physicists is constructing ITER, which will be the world’s largest plasma physics experiment to produce energy the same way stars do at their cores (SN: 1/27/16). Seven partner members — including the European Union, Russia and the United States — lead the project and develop the equipment used in the experiment. No one yet knows what the effects on ITER will be because this is a “situation without precedent,” the ITER organization said in a March 2 tweet. — Liz Kruesi

Arctic research: Since the Arctic Council was established in 1996, its eight full members — including Russia and the United States — have forged agreements on issues from oil spill cleanup plans to scientific cooperation, leading to nominations for the Nobel Peace Prize, including in 2022. It’s not yet clear what impacts the war will have on this cooperation, or on other international Arctic efforts, such as U.S.-Russia joint patrols in the Bering Sea and an E.U.-Russia plan to retrieve sunken nuclear submarines from Russian waters. — Carolyn Gramling