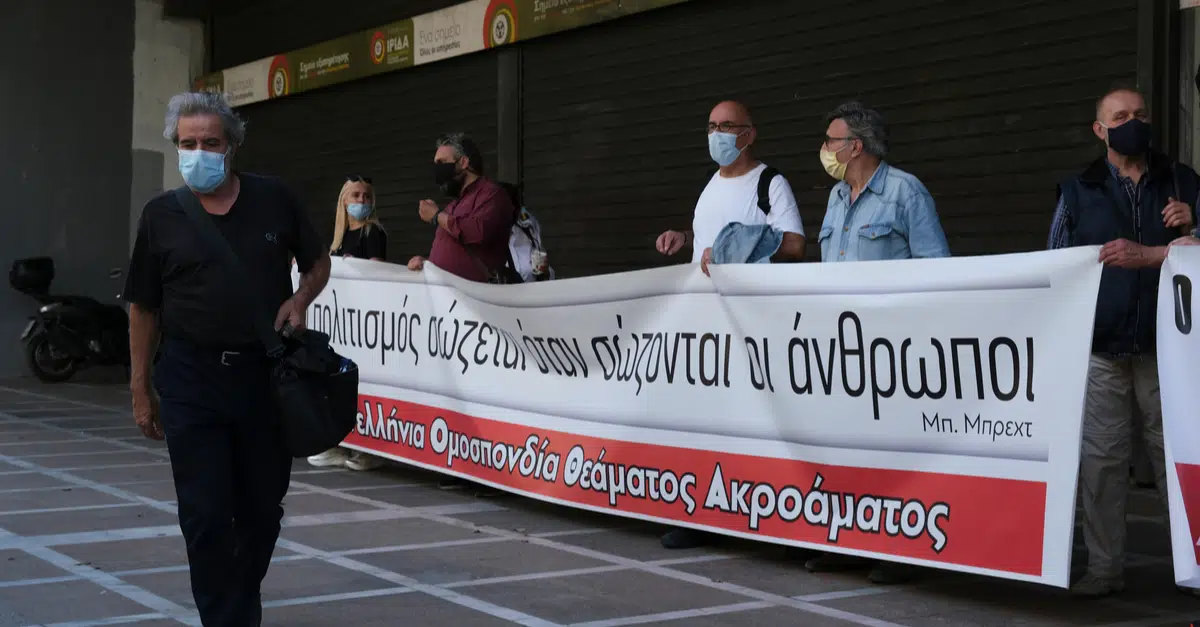 As Greece shows in extremis, the cultural sector is crying out for appropriate social policies.

For the first time in decades, in 2020 longstanding cultural institutions around Europe were forced by the coronavirus to close their doors to visitors and employees. From March that year, cinemas and theatres began to shut while concerts were cancelled.

Two years into the triple crisis—health, economic, social—caused by the pandemic, some sectors still haven’t recovered. The cultural sector has suffered a great deal, because of the close relationship between its ‘consumption’ and public entertainment, with no one quite yet knowing whether it is safe to return to cultural spaces.

This is especially true of Greece, whose cultural sector has particularities which hinder its recovery.

First, a disturbing revelation from the outset of this profound crisis was that nobody knew exactly who was considered a cultural worker in Greece—apart from the obvious categories of actors/actresses, directors and musicians—and therefore should be eligible for access to related measures and policies introduced by the Greek government. To design, produce and implement feasible and sustainable policies, every government needs data.

Recording of data in the cultural domain in Greece however remains flawed. This rule does not apply only to the current government. But the conservative administration of Kyriakos Mitsotakis, which proudly parades at every opportunity its purported technocratic adequacy, faces a major, multi-tiered deficit of hard data—and not only in the cultural sector—with several consequences which will be even more evident in the future.

Secondly, even now, after months of uneven opening of cultural venues and with the emphasis of any related measures being mainly on promoting Greece as an open and safe tourist destination, cultural workers are still in a very precarious state. Without any relevant large-scale research having been published and with a severe lack of policy-related evidence, any measures implemented hitherto in Greece have not exactly been targeted at or customised for them.

Consider, for example, if an actor becomes ill with the virus. Performance of a play may be stopped for days or even weeks, creating more managerial headaches for the company concerned. It is not feasible for all to operate under these precarious conditions, so only the most established and public companies have been reopening their doors as the Omicron variant has spread across the country.

This was not inevitable. In France, already in May 2020, the president, Emmanuel Macron, announced specific measures for small companies and independent workers most vulnerable amid the crisis. In Germany, a scheme was launched a year later to provide insurance against cultural events being cancelled or postponed and subsidies where attendances were restricted.

Thirdly, although technology created opportunities for certain categories of cultural worker to continue to produce and participate films, plays or concerts for broadcast online—which could be a possible source of revenue—this was only the case for a few, rather well-known artists. The rest remained ‘off stage’.

Most production companies were not equipped to face the crisis by responding quickly in this manner, on top of an already problematic situation regarding the granting of copyright. So streaming, apart from being in its core a different type of cultural product than live performance, was not a catalyst to help Greek cultural workers earn a living.

Of course, given that the hit taken by the cultural sector due to the pandemic is not only a national but a European phenomenon, measures should be taken at the level of the European Union. And in the context of an unprecedented crisis depriving millions of cultural and arts professionals of income, their sense of stability and future perspectives, the report adopted by the European Parliament in October 2021 on the situation of artists and cultural recovery in the EU was positively received.

This only serves to highlight how significant culture is for social cohesion in such a challenging era. EU directives and funding should not however be the only way out for cultural workers, and national governments should take more targeted action to support them.

Especially in Greece, it’s high time debate about the social dimension of cultural policy took a progressive turn, including targeted assistance for a number of groups on various levels when Covid-19 has proved a game-changer for so many. It’s necessary to design and implement not only measures for immediate relief but also long-term policies.

First and foremost, in the case of Greece one should take a few steps back to capture the human resources employed in all sub-sectors of the cultural sector. Neither the available but limited information from public records nor fragmented numbers about the private sector provided by the most organised associations suffices in this regard.

The Greek government also needs to design and implement, together with municipalities and other stakeholders, a decentralised cultural-policy scheme. Culture has also a very local character, which in the name of ‘horizontal’ policy-making should not be neglected.

Last but not least, any aid should be more carefully designed and implemented, taking into account the sector’s special characteristics, so as to provide all types of cultural workers with the means for viable living. One must not forget that they belong to the most precarious categories of employee, often having to do two or more jobs to make ends meet.

Angeliki Mitropoulou is a PhD candidate in the Department of Environment at the University of the Aegean, with masters in human-resource management and international relations from Cardiff University, and a research associate at ENA Institute for Alternative Policies.