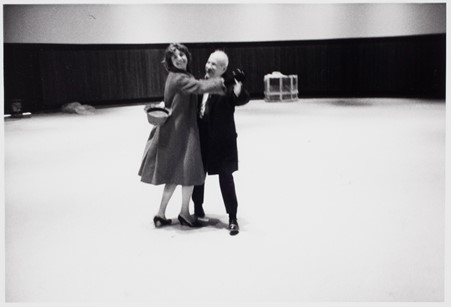 Freedom in art is never simple. This is the basic lesson of modernism. Rule follows rupture. Technical restriction opens onto formal innovation, and vice versa. As Theodor Adorno observed in Aesthetic Theory (1970), the artists who came to matter most to twentieth-century modernism ‘rejoiced less over the newly won realm of freedom’ generated by invention and revolt, than ‘they immediately sought once again after ostensible yet scarcely adequate order’.

This dialectic, linking freedom and constraint, is everywhere apparent in Helen Frankenthaler: Radical Beauty, the first show of the artist’s prints at a UK public museum, which runs at Dulwich Picture Gallery until 18 April 2022. Hanging opposite the entrance, Freefall (1993) is the first work encountered. Two metres tall and one and a half wide, of a surpassing chromatic richness, it is unlike any woodcut I have ever seen. Frankenthaler wanted it as large as possible. Working with her frequent collaborator, the printmaker Kenneth Tyler, she adapted her process to fit this demand. Blue is the print’s major note, produced by spraying varying densities of coloured pulp onto a vast sheet of paper that was then stamped with twenty-one jigsawed woodblocks to produce the finished work. As in her paintings and those of her abstract expressionist peers, the extent of Frankenthaler’s surface area allows for a great deal of variation in tone and value. In Freefall’s upper reaches the pigment is dense, and the blues are rich and dark, almost navy. These lighten to ultramarine further down and to the left, at first tentatively, then emphatically, before seeping out into whites, blacks and yellows along the field’s bottom edge. The gradations in Frankenthaler’s colour imply a transparency, a gradual opening up of the visual field, like looking into the faraway distance. This exhilarating effect is compounded by the work’s structure. The image is organised around a diminishing series of irregular rectangles – four at my count – each of which mimes the shape of the frame, like windows opening onto windows, views onto views.

In 1952, aged twenty-three, Frankenthaler made the painting Mountains and Sea by soaking thinned paint into unprimed canvas to form a stained image united to its ground: an expansive field for colour, unbounded by line. She called this method ‘soak-stain’. Like Freefall, her paintings have an endlessness and openness to them. Critics have responded to these qualities: her work is typically written up in terms of spontaneity and freedom. She could speak this way herself. ‘No rules’ reads a quote of hers, printed on the wall just inside the entrance to the exhibition. She says the same thing in a video halfway through, speaking over footage of herself at work in Tyler’s print studio. But the curation at Dulwich – which sets maquettes, preparatory paintings, and proof after proof alongside the finished prints – implies the opposite: that innovation, of the kind she undoubtedly achieved, demanded the most rigorous generation and application of new rules, new technical procedures, new forms of control.

Seeing Radius (1993) hung next to its maquette, one begins to understand why Frankenthaler – whose entire practice as an abstract painter might seem opposed to the rigidities of woodblock printing – devoted so much time and effort to this medium. By the time of her death in 2011 she had been making woodblocks for almost forty years: her first such print, East and Beyond (1973), ushered in half a lifetime of experimentation. It is shown here, alongside representative examples from each of the subsequent decades. Why such consistent application? The woodblock procedure implies clean lines, small scale, a limited colour palette. Her paintings sought the very opposite. ‘This was part of my problem’, she reflected in 1977, ‘how to adjust my gesture, my language, my mark, within the jigsaw’s’ – that is, the woodblock’s – ‘rigid laws?’ This was no simple endeavour. The surface of the Radius maquette is thick, rucked, ridged with coloured paper pulp. This would have been anathema to her paintings, which never project from the wall as this maquette does. Instead they shimmer and recede. In the final, printed version of Radius, however, tactility has been abolished. Colour, dyed straight into the paper then laid on through six woodblocks, floats in veils of thinned green.

Radius was the result of an exacting process, passing through the dense materiality of the maquette to create a final impression of hazy spontaneity. Precision is the lodestar of these artworks, even, perhaps especially, where they seem most imprecise. ‘This does not bother me’, reads Frankenthaler’s handwriting, attached to an arrow pointing towards the blending of colours along the horizontal edge of Essence Mulberry Working Proof 5 (1977). Alongside the final Essence Mulberry (1977), the exhibition contains two ‘working proofs’, one ‘progressive proof’, and three ‘trial proofs’. In fact there were sixty-five proofs in all, each of them found wanting. What the voluminous proofs show is a continual probing – after what exactly? With the exception of Working Proof 1, which fills the whole field with swaying, tree-like shapes, each proof contrasts a rectangular colour field with a large, unmarked area of Japanese Maniai Gampi handmade paper.

Frankenthaler invented her ‘guzzying’ technique for this series. She would use odd tools – a power sander, a cheese grater – to scratch and mark the surface of each woodblock, producing pits and gaps in the colour that compound the effects of the grain. This is most exaggerated in Essence Mulberry Trial Proof 19, where the deep blues and reds of the coloured field are rent by lighter patches that merge into floating, vaguely anatomical vertical forms. The final print of Essence Mulberry is more restrained. It is a balancing act reached between the pigment, the paper, and the wood grain formed from the four blocks of oak, birch, walnut, and lauan plywood that combined to make the image. Frankenthaler’s colour seems to follow the lines of the wood grain, deep red at the edges swaying and fading into blues made purplish by flecks of leftover red before pulling away at the rough expanse of paper.

Frankenthaler knew what she was working with. The paper on which Essence Mulberry is printed is a marvel: thick, coarse woven, ragged at the edges. But Japan was more than a source of exceptional materials. Engagement with calligraphy and zen philosophy thread through the entire history of abstract expressionism. The title of East and Beyond, no less than its multi-woodblock technique, signals that, right from the start, Frankenthaler wanted her printmaking to point Eastwards. Most of the works here invoke Japan in one way or another: whether via technical procedures, papers, pigments, or some less tangible (more exoticized?) idea of the nation on the part of the artist.

One series is titled Tales of Genji (1998), after Murasaki Shikibu’s eleventh-century Tale of Genji, the world’s first novel and an unparalleled record of courtly life in Heian period Japan. Shikibu, another exceptional woman artist – wealthy, cultured, working within and against constraints marked out by her gender – must have felt like a fitting precedent. Frankenthaler collected ukiyo-e prints, those eighteenth and nineteenth-century works of Japanese art in which the technique of using multiple coloured woodblocks to mass produce a diversity of tone was first pioneered. When speaking about printmaking, her discourse was filled with references to ukiyo-e masters like Utagawa Hiroshige and Utagawa Kuniyoshi. The prints in the Tales of Genji series respond to their work. Tales of Genji V uses no fewer than twenty-nine woodblocks to deliver forty-nine colours. The blocks have been ‘guzzied’, producing a calligraphic effect, forming characters that seem almost recognizable. The result is a haze of navy and pink wrapped like a body around a central red figure.

What was the price of all this beauty? Born and raised on New York’s Upper East Side, the daughter of a Supreme Court Judge, Frankenthaler was not the only artist of her generation to fall under suspicion of practicing a kind of elite aestheticism. The same thing happened to Joan Mitchell – also wealthy, also a woman. ‘Detached and uninvolved’ was Grace Hartigan’s judgement upon seeing the first batch of soak-stain paintings in 1953. Hartigan was living hand-to-mouth at this point, trying to find time to paint between temp jobs and rent crises. To her, Frankenthaler’s massive, ethereal veils must have looked intolerably otherworldly. Dismissing them in her journal – ‘I believed her to be talented, but this show makes me wonder’ – Hartigan raised questions about modernism, autonomy and beauty that already had deep roots. An eagerness to read (and dismiss) Frankenthaler’s art in terms indexed to her gender is part of the story. But the relation between beauty and detachment reaches further, across the whole history of modernist painting.

In another room, set apart from the exhibition, a small show called Monet x Frankenthaler is running concurrently. Here two paintings hang side by side: Water Lilies and Agapanthus (c.1914-1917) by Claude Monet and Feather (1979) by Frankenthaler. The pairing is instructive. The Monet is a classic late work from the Giverny period: lily pads, water, weeds, purple agapanthus flowers. Nothing of modernity or capitalism; no hint of city or banlieue. A far cry from Déville-lès-Rouen in 1870, where Monet had painted toxic chimney stacks belching soot over the old town. Even the suburbs of his Argenteuil period have disappeared. Social art historians from TJ Clark to Thomas Crow have seen weakness in the withdrawals of Monet’s late painting: a giving up of the attempt to grasp modernity and nature in imperfect synthesis; each step into the garden another flight into fiction. ‘Detached and uninvolved’ would not be a bad precis of the critical terms here.

Frankenthaler’s Feather does interesting things in the context of this critique. It is a mist of thinned acrylic: pink, orange, and green seeping across the field, acquiring no density; smudges of unmixed white sitting on top of the haze like catch-lights cutting through fog. Its dominant terms are natural: light and moisture. But like the plastic paint the image is made from, the effect is synthetic, the colours artificial. The wash of pink at top right looks more like street-level neon than a sunlit garden. At points, where the colours have blended, they form a sickly brown. Beauty comes close to ugliness; nature approaches artifice. In this conjunction, Monet’s painting takes on a different tone. Its brushwork is frenetic, dissolving into a hatch of dislocated strokes and raw canvas at bottom right. And the perspective in which he rendered his scene is extraordinary, just as disorientating as Frankenthaler’s fog. Monet’s painting lurches, from a side-on view of the agapanthus flowers, towards a tipped-forward, top-down vantage on the lily pads. It cycles through painterly modes, trying on technical procedures and discarding them as it goes. Side-by-side, both of these paintings invoke nature, but in a manner that becomes more queasily dislocated the longer you look at them.

Frankenthaler was an artist who worked by conjoining extremes: freedom and constraint; abstraction and (hints of) figuration; nature and artifice. In this she was typically modernist. There is a photograph by Alexander Liberman of her waltzing with Barnett Newman at the New York world’s fair in 1964: abstract expressionism’s most extreme proponent of economy and rigour arm in arm with the style’s most extravagant champion of beauty. Newman’s paintings combine massive, rigid geometries with huge areas of colour. He and Frankenthaler are often counterposed in the critical literature: straight lines versus soak-stains. Unlike her, he never smiled in photographs. But here he beams at her like a child. Looking at the photo, I am reminded of the ways in which gender can overdetermine the contrast between two artists. As this exhibition makes clear, Frankenthaler was just as rigorous an artist as Newman. It is by mediating such concepts as discipline and beauty that her art acquired its lasting value.